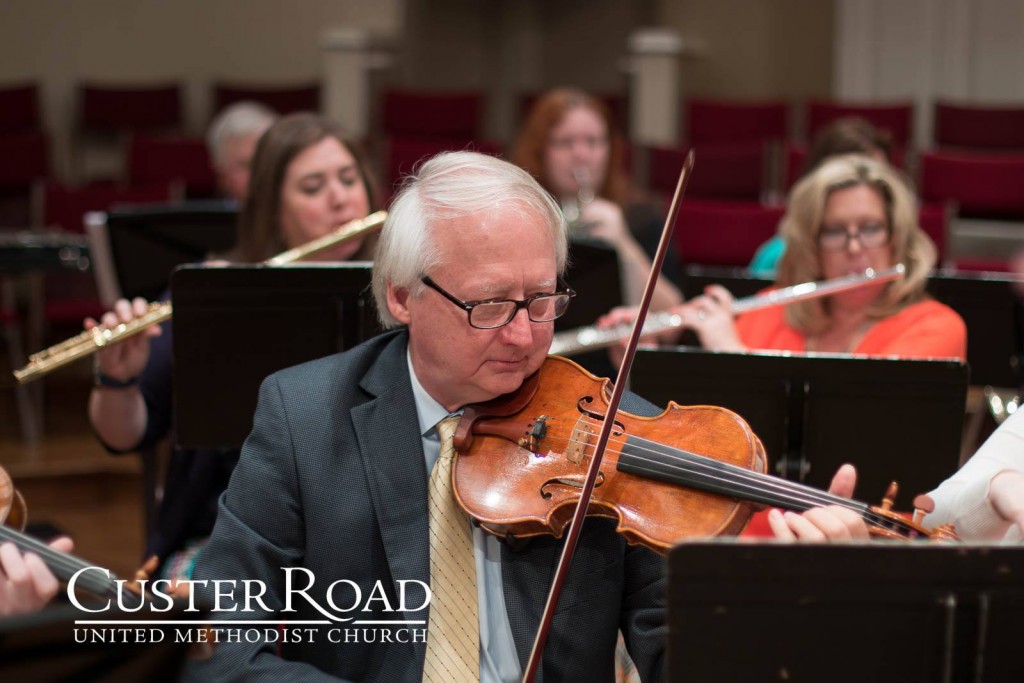 Woody Edwards, a terrific Tenor, was born in Pensacola, Florida. He was an only child until he was almost 14 years old. He is grateful for everything he has acquired in his life.

“I credit my parents, family and church for significant nurturing and instilling values and work ethic in me,” Woody said. “I have often wondered if, without these things, would I be the one in prison or the one living under a bridge?”

Woody’s passion for music began with playing trumpet in junior high school. Due to the great folk music scare of the late 60’s as a child, the guitar and banjo got him started with string instruments. At one point, he thought the five-string banjo would be a career path. Afterwards, he picked up the fiddle, which morphed into six years of Suzuki violin lessons – leading to sitting in the Custer Road UMC string ensemble.

Woody received a degree in accounting, and then proceeded to go back to school for a degree in computer science. This turned into his “meal ticket” for the following 30 years at Texas Instruments (TI) in IT because “he knew a good number from a bad one.”

“TI was a fantastic ride for me,” Woody said. “I was able to ride what I call ‘The Golden Age of Data Processing’ with the last 14 years being business continuity and disaster recovery for the central data center. In supporting TI’s worldwide data centers, I was blessed to see some of the most interesting places on the globe.”

Woody started singing in the Chancel Choir in 1995 because of Tim Morrison and the combined choir performances with the Plano Symphony Orchestra.

In addition to passions for IT and music, Woody joined Toastmasters to improve his speaking and leadership skills. In 2006, he took the lessons to sponsor a youth Toastmasters club for middle and senior high school students.

“This is a tremendous confidence builder and provides life skills not provided in schools,” Woody said. “These young people are amazing. While this is a secular organization, these youth are as full of God’s grace as anyone you might meet. After each of our meetings as I’m turning out the lights and picking up their little spit wads, I ask myself, ‘who exactly is the mentor here?’”

When his mother passed away in 2014, Woody had to decide between living in Pensacola or Dallas. He decided to stay in Texas primarily because of the “bounty of opportunities” available at Custer Road.

“Custer Road is truly doing what Christ intended us to do, not just music, but missions,” Woody said. “When I tell people we house homeless in our church, their response is typically, ‘you can’t do that.’ Family Promise is also important to me.”

Woody views his Sunday school class, Finding Our Way, Chancel Choir, and orchestra as “anchor points” in his life.

“Our Sunday School class is open about discussing our faith, what we believe and what we may or may not accept about that,” Woody said. “We are all blessed by friendships in Chancel Choir and our ability to contribute in worship and care for one another.”

Thinking back to Easter morning, Kory Knott’s sermon had a significant impact on Woody and his faith.

“Pastor Kory’s Easter sermon with the admonition to not roll the stone back over the tomb has registered quite strongly with me,” Woody said. “I hope worship services that day and Good Friday were as meaningful for you as it was to me. Not rolling the stone over translates to finding out what is next, ahead of me.”

“I know one thing: more will be revealed.”

Chancel Choir is a chorus that provides music for the 11:00am Sunday worship service. During the school year, join us Wednesdays for rehearsals at 7:15 p.m. in room B40 (in the basement beneath the Sanctuary).

Also, small vocal ensembles are open to anyone for worship participation several times a year.

There is a reservation form for Wed. night childcare so that the Children’s Director will know how many caretakers to hire each week. The form will ask you for the information on your child and your desire for childcare.

1.) If you will need it every week, you can check “standing” reservation. But… this will mean that it will be your responsibility to email Joy (jferguson@crumc.org) by Sunday night at 9:00 pm if you DO NOT need it the following Wed. evening.

2.) If you do not need a standing reservation, then you will need to go in each week and make your reservation online by Sunday at 9:00 pm.

1.) If you are not receiving the weekly E>Major email from Tracy, make sure she has your updated email address at tpraestholm@wyndhamjade.com.
2.) We have a Choir FACEBOOK GROUP:  CRUMC Chancel Choir
3.) ALWAYS check in each Wed. and Sun. at the kiosk.
4.) Check out this website – for the latest news!

1.) ALWAYS put your black folder INSIDE your blue folder when you put it away in your slot. This protects the straps on the black folders from getting torn off. Just remember “Black in Blue”!
2.) NEVER carry your hymnal INSIDE your black folder – it breaks the binding!
3.) Refrain from HOARDING personal items in the pockets of your folders! If it is important to you, take it home!

If you need to leave the loft after we sing our anthem on Sunday mornings, please wait until the first hymn or the Doxology to depart so that everyone is standing when you leave.

Submission for this site?

Do you have a picture from a choir event? Or an article, mission information, or something else you think should be added to our website? If so, please submit the details to: rebecca@virtbiz.com.