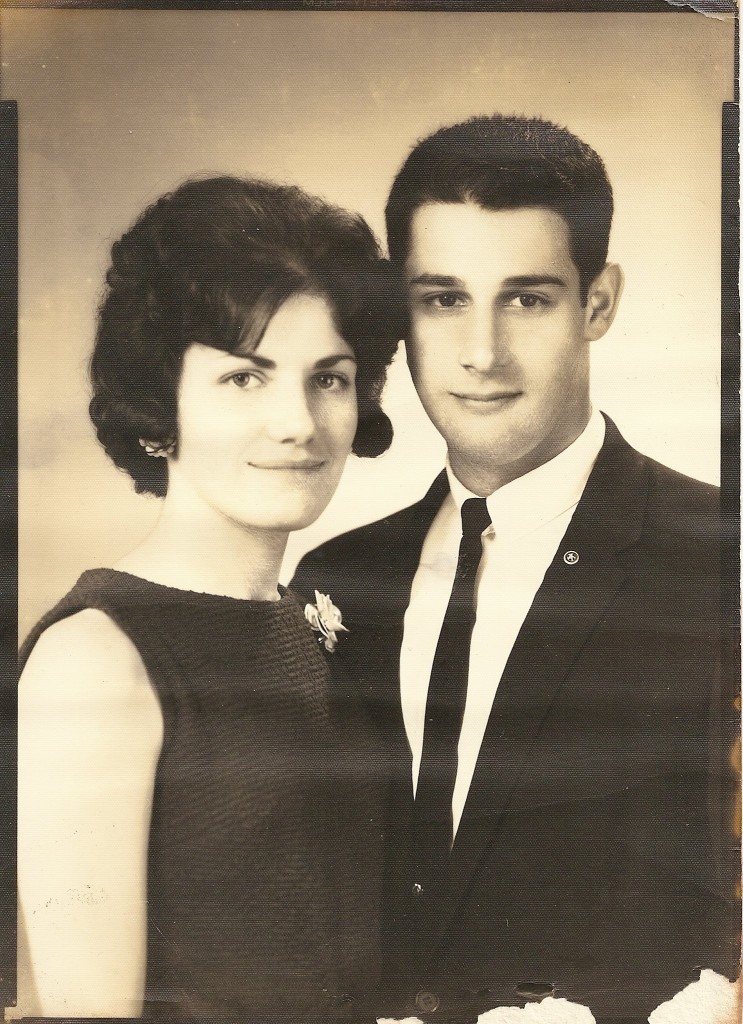 This image is Jim and Betty Damiano’s engagement picture from 1964.

Jim Damiano, a brilliant bass, was born in Utica, New York. His full name is Vincent Rocco Damiano, Jr. His parents’ first language was Italian, as his grandparents were born in Southern Italy and immigrated from 1898 to 1921.

“When my dad started Kindergarten, he did not know any English,” Jim said. “When asked about his name by the teacher who spoke Italian, he replied ‘Enzeh,’ or the nickname for Vincenzo. I guess it sounded like James to the teacher, and as a kid, I was stuck with it. My dad told his parents that his English name was James.”

As a child, Jim’s mom brought him to the local library and he has been hooked on reading ever since.

Jim met his now bride of 52 years, Betty Rockwell Damiano, at a college hangout in Rochester, New York in 1964 as “love at first sight.” Jim described his wife as “the truest person he had ever met and his best friend.”

He also loves writing, and has gotten two novels published, the first in 2005 and the second in 2008. Jim has also “dabbled” in music, having written a song for his daughter, Rebecca’s, wedding in 1996 for her to sing to her groom, Chris Gebhardt.

“It was easy to write this song for my daughter as I was thinking of my bride, Betty, and words and music just flowed,” Jim said.

Jim’s favorite form of writing is poetry. He wrote several poems for the Chancel Choir’s Christmas service a couple of years ago.  He said he “writes poetry to express times of his life that have been troubling and is a good way to capture what he is feeling.”

In addition to reading and writing, Jim’s newest venture is gardening. He said they have acreage and have planted a pecan orchard of about 200 trees and 40 varied fruit trees.

“I just love to watch God’s work as He shows His creation for me to enjoy in this form of hobby I call a labor of love,” Jim said.

Jim also enjoys traveling, his favorite place being Colonial Williamsburg. Jim and Betty first joined Custer Road UMC in 1995 through 2002 when they moved to McKinney and returned in 2014. Jim and Betty have been members of the Chancel Choir for 10+ years and views it as a “large part” of his life.

Jim also reflects on what Lent meant to his family when he was growing up in a Catholic household.

“As a kid, it was a necessity to focus on why Jesus Christ sacrificed himself for us, and that was something that was pushed by family, church and my Catholic schooling,” Jim said. “I rebelled some until I saw the light of my true feelings about Lent that one must do what one feels is best. I felt to live as Jesus would want me to live would be the best option.”

Please take some time and read this poem written by Jim Damiano for the Chancel Choir in 1999:

Chancel Choir is a chorus that provides music for the 11:00am Sunday worship service. During the school year, join us Wednesdays for rehearsals at 7:15 p.m. in room B40 (in the basement beneath the Sanctuary).

Also, small vocal ensembles are open to anyone for worship participation several times a year.

There is a reservation form for Wed. night childcare so that the Children’s Director will know how many caretakers to hire each week. The form will ask you for the information on your child and your desire for childcare.

1.) If you will need it every week, you can check “standing” reservation. But… this will mean that it will be your responsibility to email Joy (jferguson@crumc.org) by Sunday night at 9:00 pm if you DO NOT need it the following Wed. evening.

2.) If you do not need a standing reservation, then you will need to go in each week and make your reservation online by Sunday at 9:00 pm.

1.) If you are not receiving the weekly E>Major email from Tracy, make sure she has your updated email address at tpraestholm@wyndhamjade.com.
2.) We have a Choir FACEBOOK GROUP:  CRUMC Chancel Choir
3.) ALWAYS check in each Wed. and Sun. at the kiosk.
4.) Check out this website – for the latest news!

1.) ALWAYS put your black folder INSIDE your blue folder when you put it away in your slot. This protects the straps on the black folders from getting torn off. Just remember “Black in Blue”!
2.) NEVER carry your hymnal INSIDE your black folder – it breaks the binding!
3.) Refrain from HOARDING personal items in the pockets of your folders! If it is important to you, take it home!

If you need to leave the loft after we sing our anthem on Sunday mornings, please wait until the first hymn or the Doxology to depart so that everyone is standing when you leave.

Submission for this site?

Do you have a picture from a choir event? Or an article, mission information, or something else you think should be added to our website? If so, please submit the details to: rebecca@virtbiz.com.